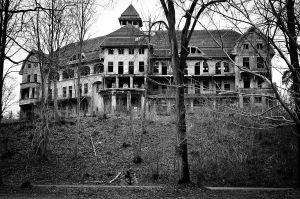 Full Disclosure: They toured the house with the real estate agent.
“We love it,” he said. “Is there anything we should know about the house’s past?”
The agent looked down.

“Well, I didn’t want to bring it up, but the house was built over an old Indian burial ground,” the agent said solemnly.

“And how did you find this out?” The husband asked.

“Well, because, y’know, things, and, well, stuff,” the agent fumbled.

“This house was built in 2005,” the husband replied. “I remember driving by here when I was a teenager.  Nothing but forest.  I’m pretty sure this area would’ve been protected from any construction if that had been the case.”

“Well, what I really meant to say was that…the previous residents were murdered,” the agent said, clearing his throat.

“Let me guess: because he was under the influence of demon?” the wife repeated.

“Well, yes, actually.  Did you hear about it in the news?”

“No.  That’s the storyline for The Amnityville Horror,” said the wife. “Plus, judging from the bins of children’s toys in one corner and the dirty zippy cup in the sink, I think the current residents are still very much alive.”

“But, this house…is haunted!”

The husband sighed and looked at his watch.

“Is there anything we should know about the *actual* history of the house?” the husband pressed.

The real estate agent pressed her lips together.

“Good neighborhood, basement finished in ’09,” she mumbled, her nose in her binder. “Family relocating for wife’s job…”

“Why couldn’t you have said that in the first place?” asked the wife.

“It is, actually,” said the wife. “Maybe it’s time to change careers.”