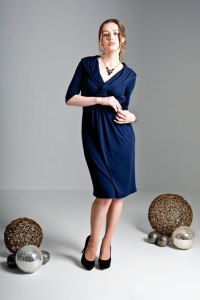 I got an email from my agency yesterday, letting me know I was released from a set of wedding shows in the upcoming months.  This is standard operating procedure in the modeling world: an agency will ask for your availability for a show, a shoot, whatever they’re potentially hiring you for, only to release the models not chosen for the job.  This usually takes place within the span of a week to two weeks, with the notification coming as last minute as one day before the schedule job.

I usually don’t get my hopes up. I respond to the availability check and go on about my life as planned, fully expecting that email a week or so later.  However, this one was a smidge different: I had already worked two of these wedding shows, and assumed I would stay around for the remaining shows.  I should’ve known better: each show had a slightly different group of models.  The likelihood that I wouldn’t be chosen for future shows was pretty high.

Of course, this didn’t stop me from asking a thousand self-defeating questions: did I do something wrong on the runway?  Did I do my hair the wrong way?  Did I say something that offended someone?

The most likely answer is that the people in charge looked over the potential models for the upcoming shows and decided, “Let’s have these models instead.  Tell the ones we didn’t pick that we don’t need them.”  Which is brutal, but also how the business operates.

There’s a whole misconception with modeling.  People think that becoming a model validates your appearance in some way — or that it’s the ultimate confidence booster.  When people think “model”, they think an open-layout studio with huge lights and a photographer shouting out, “Yes!  Perfect!  You’re beautiful!”  Unfortunately, that couldn’t be further from the truth: you need to go into modeling already sure of yourself and your appearance or else you will collapse in on yourself.  All it takes is one casting directors snide remark, or an outfit that is too small for you, or your first set of rejections, to make you feel like the lowest of the low.

Even in the best case scenario, you have to deal with thousands of potential jobs slipping away from you because your look wasn’t the exact right look they were going for.  You have to go forward with your own brand of self-confidence, your own way of feeling validated.

That’s a good skill for everyone to have, regardless of their involvement in the modeling world.  Not constantly relying on other’s behavior to make or break you, and recognizing that it’s useless to take things personally all the time.  It makes it easier to manage when friends act up, guys don’t text back, or coworkers get out of line.  You’ll drive yourself crazy if you use people’s opinions of and actions towards you as you’re only gauge of self worth.

Besides, you have to focus on the positives in every situation.  Like this one: yeah, it stinks that I’m not part of the show, but it does free up my weekend, which means I can actually go to a birthday party that I had originally nixed due to the potential show.