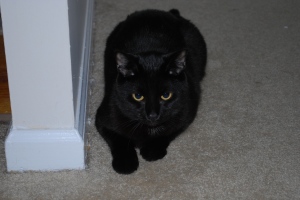 I first want to start this by saying that my cat has just indicated he wants to go on my lap my turning my back into a human scratching post. He is now happy as a clam sitting in the nook I’ve created by crossing my right ankle over my left knee (the figure-four position the only way he prefers lap sitting), intermittently pawing at my forearm whenever he thinks I should stop typing and start giving him my undivided attention.

I’m saying this for two reasons: 1) My blog, and bitch gets to write what bitch wants to write about, and 2) I need to show that there are bigger prima donnas in this house than me.

So I’ve apparently gone meta these days, writing more about writing itself than about any other topic.  I blame the NaNoWriMo participants and their “writing about not writing”.  But, oh well: again, my blog, and bitch get to write what bitch wants to write about.

I typically post my published articles on Facebook or Twitter, usually as soon as I find out they’ve been posted.  And, since it’s such an instant reaction, I got into that habit of posting them alongside my knee-jerk editing gripes.  I mean, there’s nothing more professional than seeing: “Hey, here’s my article on Elephant Journal!  Let me take a moment and complain about how they butchered the layout!”

Sometimes, this public griping is justified: I once wrote an article about why it’s problematic that people reacted to the “F-Bombs for Feminism” video with comments like, “That 10-year-old is swearing!  They ruined her purity for this video!” — and why this reaction is actually symptomatic of the exact issue they are addressing.  The published piece had vital sections taken out, with a new, combative title in place.  It made it look more like I was yelling at the people who were upset at the video, not pointing out that the hyper-emphasis on purity in girls sets the stage for a whole slew of issues women deal with.

“They turned a sociological piece into a piece of clickbait!” is a reasonable gripe. “They added paragraph breaks where I didn’t have any!” is not.

It’s easy to get possessive and protective about how my writing is published.  To be clichéd: this is my passion.  This is something I’ve devoted years to. It’s my passion because I have an obsessive love with the English language.  I choose and change around my words like a musician chooses their chords.  And we all know how well musicians fair when they find out they don’t have full creative freedom.

It’s downright laughable: I write whatever it is that I want to write about.  I have no editor-boss telling me, “Write a piece on Nick Jonas is playing a gay character on a TV show!  And talk about how he’s very verbal about the gay sex scenes!”  Actually, that would be something I would write about: former tween sensation whose marketing people branded him and his brothers as the ultimate “pure” Christian boys now excited about playing a gay MMA fighter, and what that means in a world where “gay” is no longer synonymous with “bad/sinful” — and virginity can’t be a commodity like it has been over the last 10 years (over the last 5000 years, really).

Oh, oh, and then I could write something about homosexuality in MMA.

Okay, that has turned into a complete and total digression.  But again: my blog, and bitch writes what bitch wants to write about.

So, let’s try a different angle: “Write a piece on Nick Jonas playing a gay character on TV!  And don’t try to get all ‘observations on the changing social tides’.  Talk about how he’s got lots of muscles!”

(He does have a lot of muscles right now.)

I imagine musicians who write music for a living might hear the final product, sung by some tween sensation (I’m going to keep using that phrase because it’s just that contrived), and immediately wonder if people can hear the changes.  “That’s not how I put melodies together.  Anyone who knows me would know this!”  I know I do the same with my writing: every time I see an editing change-up, I go:

“That’s not my voice.  Anyone who knows me would know that.”

But here’s the kicker: they can’t.  No one really knows that you would never word something like that.  No one really knows that you would never use commas in such a fashion, or prefer “’til” over “till” (c’mon people, it just makes sense! “‘Til” looks like a proper abbreviation of “until”.  “Till” is something you do to your garden.)  Some friends know that I’m insane about Oxford commas, quotation marks inside the punctation if I’m just quoting a single word, and en-dashes even when an em-dash is the correction hyphen.  But no one — save for maybe my husband or my best friend — will read a piece and go, “They took out all your Oxford commas, huh?”

And maybe that’s why I internally flail, letting everyone know that this piece is not 100% my wording: I’m so stupidly attached to my syntax that I cannot stand any variation.

But, in the end, editors are needed.  Yes, it’s fun to write in my blog (where bitch writes what bitch wants to write about), but I’m limited in how I express my ideas.  I know what I’m thinking, but no one else does (unless there’s a psychic in the room, in which case: stop judging me).  I’m going to write already knowing what concepts I want to convey.  The reader has no clue what I’m thinking — which means they run the risk of having no clue what I’m talking about in the first place.

We all want to think we’re Joss Whedon: creative genius, only hampered by authority, best left to do exactly what he wants to do.  But the reality is, most of us are, at best, George Lucas: great ideas, but God help you if you’re given full reign.  We’d like to pretend that, given full creative freedom, we’d make a Firefly.  In all likelihood, without people there to challenge what you’re putting out, we’d make a Stars Wars Episode One.  Or we’d Michael Bay it, and just blow shit up for no good reason.

A writer’s voice is key, but we have to find the balance between the muzzle and the karaoke microphone (that is a terrible metaphor and any proper editor would delete that).  Like any good idea, thought, or piece of work, if it can’t stand up to critique, if it can’t be properly defended, maybe it’s time it gets reevaluated.

Also, the cat in question just jumped off my lap and is now trotting around the house meowing, because he has decided he doesn’t like it when I’m awake and my husband isn’t.  What a brat.