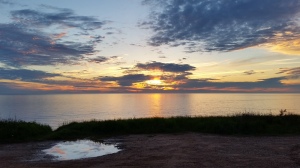 The problem with being a writer — and with primarily being friends with writers — is that everything is a goddamn metaphor.  Everything is symbolic.  Everything holds a heavier resonance.

A little while back, my best friend wrote a piece on sea glass, effortlessly comparing who we are to what that once-ragged glass will go through in order to become what it is.  What we are to the world, the glass is to the sea.  Sometimes you are scattered across the rocks, sometimes you are pushed away and back in on yourself — but the importance is on letting the universe do what it needs to do with you in order for that beauty to be revealed.  In order for you to become what you need to be.

Of all the beautiful, brilliant things she has written, I contend that that’s her best.  In a crafts shop in New Brunswick, I bought a necklace with a seaglass pendant: my little reminder that what I am to the world, the glass is to the sea.  Sometimes you feel shattered and disconnected, but that might just only be the beginning.  Your potential has only started to be unleashed.  Let the universe turn you around for a bit. 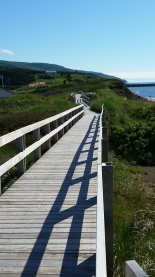 On a beach in Nova Scotia, I scour the sand for trinkets.  There are no sea shells, but plenty of sea glass.  As if a whole caseload of glass bottles had been shattered a while back and this was the end result.  They are beautiful little pieces, each worthy of becoming their own set of jewelry.  I start filling my hands, my pockets, with each piece I can find.

I soon come across a little green piece, sparkling like an emerald against the shore.  I’m already imagining what I could do with it, this gem wedged in the sand.  This piece, fit for any necklace or bracelet or pin.  A diamond in the rough.  An end result of letting the oceans churn it up for a bit.

But a closer inspection shows that it’s not even halfway there.  It’s still mostly translucent.  The sands have not dulled the edges.  I hold it in my palm, knowing that one wrong move and it’ll cut my skin.  As much as I wish it were, it is not sea glass.  Not yet, anyway.

It makes me want to quote Maureen in Rent: “IT’S A METAPHOR!”  I want to make a face and roll my eyes and laugh it off.  If I were within cellphone range, I’d text a joke about it to my best friend, the creator of the first sea glass manifesto.

I want to laugh it off because the continuation of this metaphor is hitting a little too close for comfort.  That sometimes, on the surface, you have made peace with the churnings of the sea, but secretly you’re desperate for the end result of that seafare, that you just want to become sea glass already.  But the reality is that your edges are still sharp.  Hold tightly and it will cut you.  You are not where you would like to be, even if it might look that way from far away.

You’ve washed up on the shore, but you’re not done yet.  But give it time.  It’s only not there for now.

“I’ve decided I’m done telling myself ‘be strong’.  Don’t be strong.  Be present,” my best friend would tell me not even half a week later.

Holding the green piece tentatively between my index and thumb, I toss it back into the sea.  I’ve collected enough pieces to fill a small treasure chest, but my mind is stuck on the one I threw back.  My little metaphor in the rough. 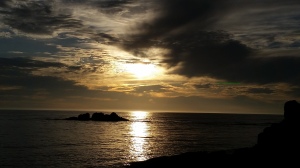 Give it time.  Let the waves give a few more turns.  Let the sea drag you back out.  Let the world drag you back in on yourself.  Be present with what you are.  Be okay that you’re not done yet.  The key word is “yet”.