Usually, my fantastical yoga scenarios are purely a defense mechanism.  I’d embarrassed myself and I would use humor as a way to process the mortifying experience.  But sometimes they come from incredibly random places — and the same part of my mind that will take an embarrassing moment and run with it will take that random spark and go on a full-out sprint.

Case in point: this picture. 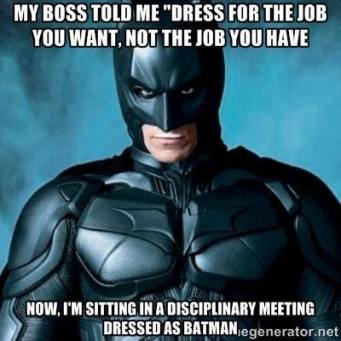 Dress for the job you want, not the job you have.  Well, that’s a bit awkward: I’m a yoga instructor, but I’d really like to be Batman.  What would happen if I got rid of the leggings, the tank tops, the bare feet, and decided to don the Batsuit instead?

Or — or! — even better: What if Batman himself lead a yoga class?

The room is dark.  Cave-like, one would say.  A startlingly composed British man in a suit & tie checks you in for class just outside of the studio, offering to hold onto your jacket and bag while you attend class.  You unroll your mat and patiently wait for the teacher to arrive.

Suddenly, the windows to your left fill with light.  You, alongside the other students rush over.  Outside stands Commissioner Gordon, turning on the Batsignal.  Or we say: the Ohm signal.

Before you can get back to your mat, a dark figure rushes in — a blur of black whipping through as the Bat Symbol suddenly comes alight through strategically-placed salt lamps positioned around the room.  Everyone can’t help but remark on the entrance as they’re slowly making their way back to their mats.

Everyone takes a seat, including Batman, who does a strategic 360-degree twirl in order to find his easy seated pose.

“We will start the class…with some…chanting,” he says, his cape draping over his knees in his half-lotus position.

He stops, looks around, and clears his throat.

He lets out a sigh and goes, “All right.  It is time to begin class.  Make sure you have all of your props handy.  Grappling hooks, Batarangs, Kryptonite ring…”

As class starts, Robin attempts to come into the room and give everyone hands-on adjustments and assists.  It quickly becomes apparent that he adds absolutely nothing to the class and, within minutes, he leaves the room, mumbling something about Joseph Gordon-Levitt ruining it for the rest of them.

(Spoiler alert for those who haven’t seen The Dark Knight Rises.)

“Listen to your body,” Batman reminds in his low, cadenced voice. “Do not go into the pose just because I am doing it.  Remember that I am a symbol.  A symbol representing something far greater than an individual man.  Also, I’m not the one wearing hockey pads.  This Batsuit lets me do some seriously awesome stuff.”

As the class attempts an arm balance, with many of the students tumbling out of the pose and onto their mats, Batman stands over the class and says, “A wise man once said: ‘Why do we fall?  So that we can learn to pick ourselves back up.’ Also, this is giving you great upper body strength.”

Someone in the room attempts ujjayi breath.  Before the person can even let out the constricted exhale, Batman shouts, “BANE?  BANE!  ARE YOU IN THIS ROOM?  ANSWER ME!”

The only way you know class is over because Alfred comes in and turns on the florescent lighting.  Batman is no where to be found.  Outside in the lobby, Robin attempts to sell you coconut water.