Firstly, an update on my brother, since it actually was getting under my skin that I never updated my blog about how everything was going (and it’s a monstrous pet peeve of mine, when people are quick to communicate tragedy/bad news, but feel zero impetus to communicate the resolution):

He’s doing better.  Surgery went well and he’s home resting.  His mouth is wired shut for a little while longer and there are a few other health complications we’re taking into consideration, but he’s on the mend and I still am so amazingly grateful that he got out of the accident the way that he did.

Secondly, an update in general, because I think that’s what blogs are actually for: self-indulgent platforms to just talk about your life.  And I want to talk first about the one thing I never expected to have happen: getting cheered on by Steven Tyler while doing aerial silks.

I practice and train at Bare Knuckle Murphy’s/Go Ninja, a combination boxing and aerial circus gym (and, if you haven’t been there, and live in the Manchester area, get on that, because where else will you get that combo).  Last night, Murphy’s and Go Ninja provided entertainment at Best of NH, held at a baseball stadium in Manchester.  Us aerial people got to do our thing on the silks on the greens while the boxing portion stationed themselves at the front gate.

Eventually it was my time to go up on said silks.  And, for some reason, I was genuinely nervous.  This wasn’t my first time performing on the silks, but definitely the first time in the middle of a baseball diamond and with no crash mat underneath me.  I started my routine and slowly got into the swing of things when suddenly I heard:

Now, Steven Tyler’s voice is not exactly nondescript.  And he had actually been hanging around the Best of NH festivities (something us aerial peeps really didn’t get to indulge in, being on the baseball diamond and away from the main festivities).  I looked over to the balcony area and saw him hollering and waving and cheering me on.  I immediately started waving back (thank God I was in a pose where I could let go with one hand).  He started blowing kisses.  I started blowing kisses back.  And then I spent the rest of my routine going, “That just happened.  That.  Just.  Happened.”

I have a lot of weird and circuitous lame claims to fame, and now that is one of them. 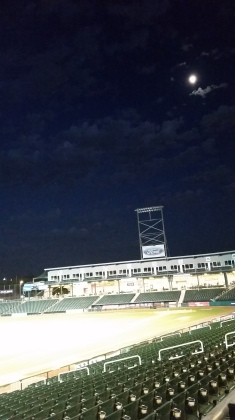 The night in general was incredible.  My Murphy’s/Go Ninja people are like family to me.  My fellow weirdo, energetic, rag-tag team of misfit toys.

Oh, also I got a free pie.  An entire pie.  Once the night was over, a pie vendor just handed out boxes to those who were still there.  It pays to be part of the event. 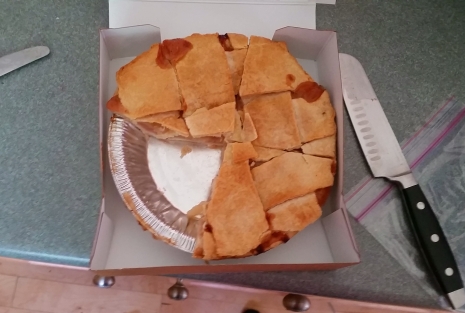 It has definitely been an exciting and bittersweet and busy time for me.  One of the first studios I taught regularly at is closing down.  Since nothing ever slows down for me, I’m in talks with people regarding starting up new classes at some new locations.  Through this, I learned two of the people whom I reached out to (or who reached out to me) had already taken my classes and had not even realized it until we were already knee deep in discussion. 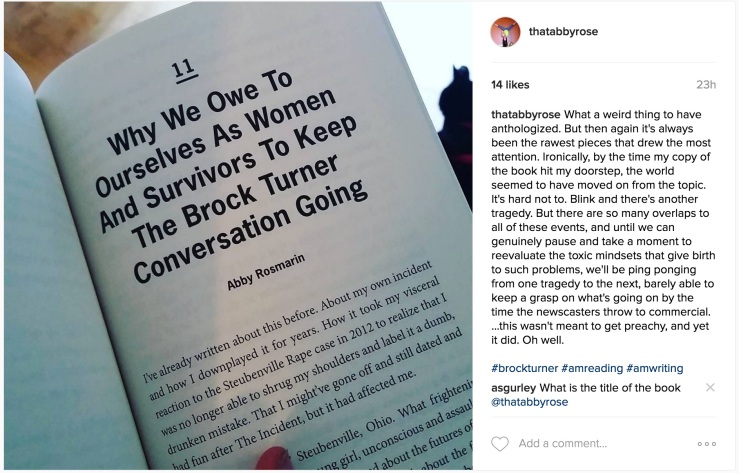 It’s also a busy time on the creative side.  I continue writing for websites like the Huffington Post and Thought Catalog.  My poetry collection was just released through Thought Catalog, and an essay I wrote on Thought Catalog regarding the Brock Turner case ended up in a collection of essays about the Brock Turner case.  Ironically, by the time the book was out and in print and I received my copy, America was already two tragedies removed from Brock Turner.  At some point I’ll write an essay for HuffPo (or whoever will take me) about America’s addiction to high-intensity tragedy (without pausing for resolution), but that’s for another time.

I enjoyed a brief (albeit short-lived) stay writing for Bustle Magazine, and I’m starting up a long-term position writing about yoga for Higher Self Yoga, starting in July.  And now I’m wading into the waters of my fourth manuscript — a YA novel, if you can believe it — while I try to get the chutzpah to re-up the agency search for the third manuscript (while the second one can stay languishing in its cell until I have the patience to gut it and rewrite it from start to finish). 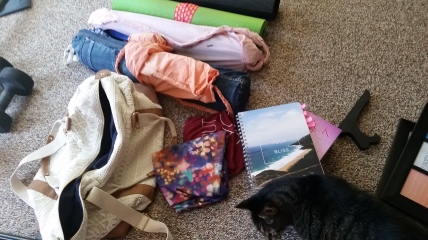 I’m also getting ready to host my first retreat.  Ever.  There had been a lot of bumps and detours getting this puppy together and getting it out there, but somehow we were able to get this beauty off the ground.  Tomorrow, I’ll be spending the weekend with two lovely ladies who will be co-hosting alongside me.  The whole event is about grounding and letting go — and using spirituality to tap into the creative side of us.  I get to combine my two passions in order to help students tap into the artist within, let go of whatever it is that’s holding them back, and become the creative they are meant to be. 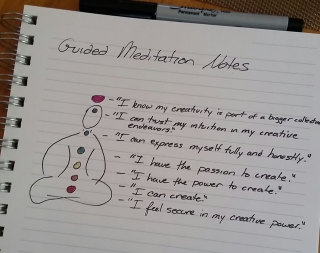 Speaking of letting go, I figure I’d round out this incredibly ineloquent blog post with a similarly ineloquent ramble about prana and apana.

(And to those who don’t study yoga, Hindu philosophy, or are just really bored — thanks for stopping by!)

To put it into offensively simple forms, Capital P Prana is life force; as subsets, prana is the inward moving energy, and apana is the outward moving energy.  Our breath is a perfect example of prana & apana.  We inhale vital oxygen.  We exhale no-longer-useful carbon dioxide.

Sometimes I talk about apana in my classes.  I talk about how our exhales are a type of apana.  And sometimes I’ll go further and use it to talk about what serves and what doesn’t serve.

Our lungs don’t hate carbon dioxide.  There is just no use for it.  And our lungs don’t expel it out of malice.  They just do it.  They need oxygen to function and they don’t need carbon dioxide.  If we attempt to interrupt said prana/apana, we’ll be in trouble & our bodies will fight tooth & nail to get the cycle started again, but for the most part it is done on neutral ground.

In fact, the idea of being angry at our exhales seems a little silly.  It’s just the natural ebb and flow of things.  Of everything.

It’s something I remind myself, a lot.  To be frank: it’s been a rough year.  It’s been a rough couple of years.  I’ve yet to shy away from that truth, on here or anywhere.  And while I’m incredibly grateful for all the good that has come my way (and there has been a lot of good), I can’t exactly use it to invalidate the tough.

But then again, it’s been the type of tough that wakes up you to your own BS.  The type that goes, “You really need to stop holding onto that,” — and when you fight back, life counters harder, downright prying each and every individual finger off from whatever it was you were clinging to.  Fighting tooth & nail to get the cycle started again.

Sometimes it really is a simple as how we breathe.  We take in what serves and sustains.  We let go of what doesn’t — or doesn’t anymore.  Old thinking patterns.  Old routines.  Toxic personalities — or toxic ideologies.  Frameworks that we never really fit into in the first place.  And it’s eventually replaced.  And eventually we repeat the cycle all over again.  And it’s a constant, overlapping ebb & flow; things are released in one aspect of our lives while something new comes in from a completely different angle.  We seek out while simultaneously letting go and we let go while simultaneously seeking out.

And sometimes we throw our hands up and go, “I don’t know WTF to seek out or let go of!”

In which case, we breathe.  Because, at least on the most basic level, we already know what we’re supposed to be doing. 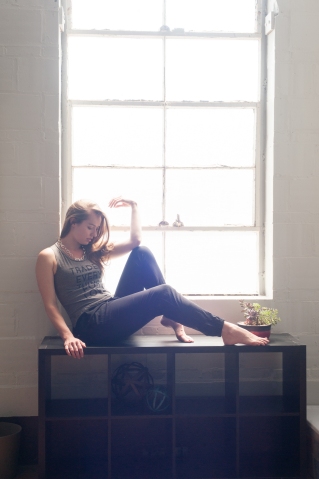 And, lastly — because I live for adventure, or at least being really, really busy — I’ll be taking off the Tuesday after my retreat on a road trip journey to the Grand Canyon, with stop-offs in Memphis, New Orleans, Austen, and a few other resting places.  Road trips — especially road trips through states I’ve yet to travel through — ease my nomadic heart, and I’m looking forward to two and a half weeks of the open air.

I’m also looking forward to a little rest.  I was doing the math, and I haven’t had an actual day off in about 3 months (and that’s not including anything writing-related, which is kind of a constant job and always has been).  I’ve taught at least one class every single day since about late February, early March.  And it’s starting to weigh on me.  As much as I adore my profession, it will be nice to take some time to focus on that inwards-moving energy — take some time to fill up my own life force.