“Man I HATE white people vacations!” a white college-aged boy shouts from up the trail.  I laugh so hard my voice echoes.

We were on our way down from the Chimney Tops trail in the Smokey Mountains.  The college-aged kid and his two other friends were on their way up and had stopped to ask us how far to the summit.

It would be a statement I’d repeat throughout the day to make myself laugh, especially when my legs were fatiguing or I’d lose my step or a swarm of bugs would decided I was their best buddy despite the bug spray.  One of those silly statements that tickles you pink and you do yourself a disservice not to return to it as often as you can to get as much laughter out of it as you can.

Yesterday we toed along the Appalachian Trail.  We detoured through the Chimney Tops trail, scaling the rocks at the summit until I was at my literal edge – until I felt actual, real fear, which is a completely different drug than the synthetic fear of roller coasters and other thrill rides.  We then followed the AT as it danced along the North Carolina/Tennessee border, bouncing from one state to the other as we walked across a ridge line, pausing to rest and eventually turn around at a shelter, meeting people who’d been out on the AT for weeks, possibly months.

I went to bed bone-tired, asleep before my brain could even ponder the question, “Will this is be one of those nights where you don’t fall asleep?”  And I slept a glorious, deep sleep, dead to the world, until I was undeniably awake before the sun and my husband and basically anyone who wasn’t the night staff at the hotel was up. 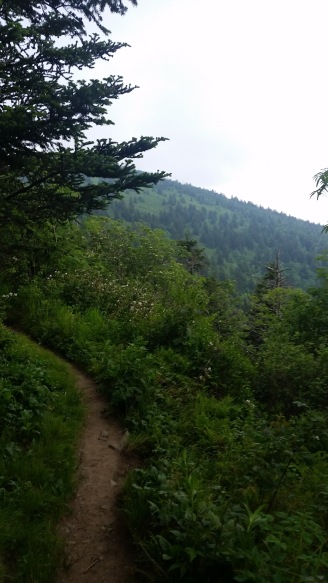 Hiking is in my blood.  My parents were Appalachian Mountain Club members and actually met while carpooling to a hike.  I was on the trails before I could walk, lugged along in one of those baby backpacks.  To this day, the smell of a stream passing over rocks on a hot, humid day pings at the most innocent, pure, unadulteratedly happy part of me. A completely different drug than the adrenaline jolt from scaling rocksides.

If you asked me to name the biggest, best, most positive thing my parents instilled upon me, I would unequivocally answer, “A deep, passionate love of nature.”  For all the things I might be sorting out as an adult – and for all the ways my parents’ marriage spiraled and unraveled as the decades went on – I was given the gift of day hikes and campfires and mornings on the lake and there’s nothing in this world I would trade that seed in for. 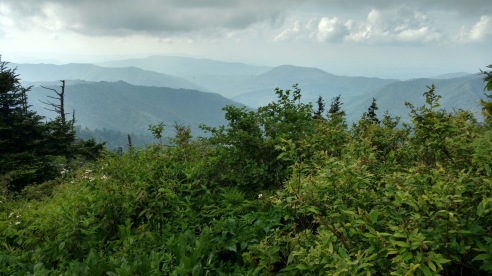 It goes beyond being around fresh air and nature and likeminded individuals (or by yourself).  There are few things that will help reset the Superego and Ego quite like going into Id mode for a day.  To care about the absolute basics as you carry onwards.  Food.  Water.  Shelter from the elements.  Sustenance.  Rest.  Onwards.  And all of modern man’s thinking and anxiety is forced to take a backseat.

It’s a forced focus on the present moment.  When you’re on the trails for hours – days, possibly – there’s nothing that would wear you out faster than attaching yourself to reaching the summit, reaching the next checkpoint, etc.  It’s actually why I loved mid-distance running until I tore a hamstring tendon (unfortunately, the, “guess again,” portion – which is also quite prevalent in mid-distance running – is how I got injured in the first place, but that’s for another day).  After a while, you have no choice but to focus on the here-and-now.  This step.  This view.  It’s like going into Id mode, without shunning the Ego/Superego.

It’s meditation.  And I built an entire career around all the ways you can trick yourself into getting that.

Throughout the day, I talked with my husband about growing up by the ocean, but loving the mountains.  How I spent my formative years just south of Boston, my summers in the mountains of New Hampshire, and how, the older I get, the more the mountains call to me.

Both are symbolic of the vast and overwhelming wildness around us, but in polar opposite ways.  The ocean is wild in a way that mankind can’t be a part of.  We can skim the surface and we stand along the shore, but it is truly a beast that lives separately.  The mountains are a more steadfast type of wildness.  A wildness that reminds you that you are part of that vast, overwhelming beauty.

Both represent the unstoppable, untamable, unfathomable expanse of the universe.  Only one really reminds us of our place in it.

As much as the ocean air pings at a wonderful, unadulterated, pure place, I’m happy that, at the end of the day, I prefer the mountains.