On Sunday — on Father’s Day, no less — I finished my in-person exam/practicum, thus completing my 300-hour training in yoga therapy.

It capped off an amazingly busy May into June; a time where there seemed to be so much going on at once that I could focus only on the most immediate deadline.  From my maid of honor duties, to my best friend’s wedding; from leading workshops, to taking them; from hosting dinners & barbecues, to my in-laws coming in from Ohio.

It also capped off a gently transformative and evolutionary 10 months, a time where things fell into place — where light was shined where it needed to be shone — and everything tumbled into the exact spots they were always meant to be.  It was a 10 months that were never calm, never linear, never one-thing-at-a-time.

In September, when I just started the training, I was finishing up my young adult novel about the ballerina who quits the dance world and joins a boxing gym in secret.  From October to November, I was enrolled in a group fitness certification course, reading its textbook with the same blazing speed as I was reading my yoga anatomy one.

When I finally took my exam and passed, I sat back and went, “Well, what am I going to do with myself now?” — assuming with my trademark naiveté that this would be the crux of my multi-tasking. 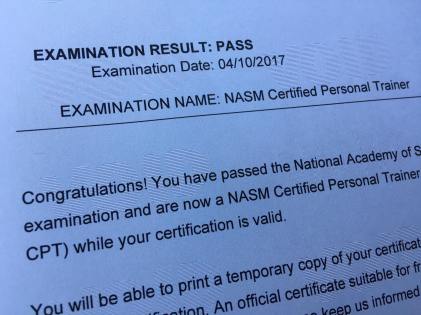 In January, I got an email from the same group fitness course, asking me to take their beta version of their newest course — and if I could take the course and the exam in a timely fashion, I’d essentially get a chance to take the personal training course I’ve always wanted to take, but for dirt cheap.  I then spent the next 3 weeks at a blistering pace, making sure I fulfilled my requirements in time for the deadline.

In February and into March, I found myself at another blistering pace, this time writing my newest novel — this one about a wife who learned just how much of a lie her life had been after her husband passes away from a sudden heart attack (and another women still desperate to reconcile her past, decades later).  In 5 weeks, I wrote that novel — the fastest I’ve ever written any manuscript, ever.  Within weeks of finishing, I signed up for the personal training course, diving in at the same blistering pace as I did with the second group fitness course, and taking my exam only a month after signing up.

I didn’t even get a chance to ask, “What am I going to do with myself?”  At that point, it was only a few months until my best friend’s wedding, and I had a bridal shower & a bachelorette party to clumsily put together from my spot in New England.  I was hightailing it to Chicago one weekend and having people over the next and going to New Jersey for the wedding the weekend after that and having my final yoga therapy seminar the weekend after that — everything happening at such a breakneck pace that I almost tumbled into my final exam, pushed by the sheer momentum of everything behind me.

“And now you’re done with all of your trainings,” said my husband, facetiously adding: “What are you going to do with yourself?”

The answer, in the manic swirl of my life, is quick in the short term: I’m making good on my plans to visit the northwest — returning to Utah before immediately driving through Idaho and into Montana and Wyoming.  I leave soon for the mountains of Glacier National Park.

What am I to do with myself?  Pack.

And maybe, in the longer term, it’s somewhat as quick as well.  There are two new manuscripts now to edit, to query, to edit again, to query some more, to submit to anyone who will give it a passing glance.  There’s an older manuscript that might be entering its newest phase in my efforts to get it published.  And there are other trainings on the horizon I want to take part in, ones that will help me with my niche of therapeutic exercise.

But, really — what am I to do with myself?  The true long term answer?

I’m not in the same place I was a year or two back.  I’m no longer the teacher who had to fill her schedule with classes and workshops and subbing and training, because God help her if her mind went idle for even a moment in the midst of everything that was happening.  I’m not even in the same place I was in September, where a hysterical heart had morphed into a determined soul and I was checking off all the necessary things I wanted to do, what I wanted to bring with me, and what I needed to leave behind in order to take the next step forward.

I’m known for having an insane schedule, for going at a breakneck pace, for getting things done in ways that makes people go, “How did you have time for that?”  I know I’m industrious at my core.  I have a hard time with just hanging around.

I want to bask in the outcome of what I’ve been through and where I am now.  I want to spread out that hysterical heart and that determined soul before me.  I want to notice from afar everything that both of them have been through in the past three years and relish in how they’re — how I’m — on the other side of it.  I want take a moment and pause and realize I did not get lead astray when life said, “I’m going to make you happy.  But first, I’ll make you strong.”

I want to let the world slow down and settle in.  There have been enough upheavals, enough crises, enough demolitions.  I want to spend as much time as I can in that calm after the storm, when the sea smells like adventure and the air feels replenished.  I want to let myself feel light knowing that I did make it out all right — perhaps with a few scars, but with plenty more accomplishments to show for it.  And now I want to sit with the fruits of my labor and feast.

I want to simply be, and enjoy what it means to be.