We’re stringing up our peach tree in essentially reverse-bonsai fashion.  The branches have gone horizontal and dipped down, semi-ripe peaches inches from the ground.  It looks like all it would take is one strong wind and every major limb would snap.

We’ve done this before — peach trees bear fruit once every three years, and, when we first got the house four years back, we were stringing up what was essentially a sapling, clearly too young for the task at hand.

Three years later and it feels like little has changed.  Every week, the peaches grow bigger, and the branches sag a little more.  I check the fruit daily, seeing when I can finally pick the fruit — relieve the strain before a branch breaks off.

After a major rainstorm, one of the major branches does snap in half.

But by the end of August, the peaches are ready — and on the exact same day they were ready three years prior.  I remember making an analogy back then — this time three years ago, I had also just finished my yoga teacher training, and felt this incredibly vast and unpredictable world open up to me — about gaining abundance before you’re ready, and how heavy it can feel.

The peaches are extremely heavy.  My arms fatigue as I carry bowl after bowl inside.  I try to add up what the weight must be in total.

My analogy from three years back — about having abundance, bearing more fruit than you’re ready for — comes back into my mind.  The tree has grown considerably but it has also yielded an exponentially larger amount of fruit.  Fruit that has weighed it down, fruit that has made a branch snap, fruit that has made us scramble to set up a pulley system so it wouldn’t break under the strain, under its burden.

A burden.  That’s how I saw the fruit when it wasn’t ripe.  Just hanging on the tree, threatening the tree’s very existence — but the timing wasn’t right to remove it, just yet.

But, when they were ripe, the burden became quite literal fruit.

“Sometimes your burdens become your fruit,” I think to myself after clearing off a branch. 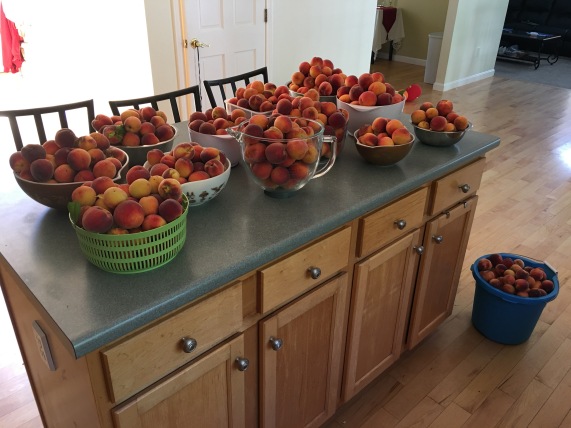 I don’t mean it in the perverse, pseudo-Christian sense, where we throw ourselves into burden and acquiescence and suffering because somehow that is God-like, somehow that is our only way to truly communicate with the Powers that Be.

Our burdens become our fruit.  The very things that weighed us down and threatened to snap us in half can yield us a harvest beyond our wildest imagination.

It’s how the very things that seemed the hardest, most painful, most arduous, end up producing exactly what we need.

It’s how you can go to hell & back and somehow stumble across heaven upon your return — and recognize that it took the road to hell to get on the path to heaven.

It’s how you can be so tremendously upset at someone for how they were to you, for the hell they put you through, and yet still be grateful for who you became because of it.  It’s how you can feel the desire to simultaneously curse that person out and thank them for creating the flames that your Phoenix rose out of.

It’s how you can remember that your personality wasn’t and will not be forged when things are good, when nothing is the matter, when there are no demons to conquer — that your defining moments happen when you swore you’d snap from the strain of it all.

It’s how you can marvel at what you went through and realize that you wouldn’t try to erase the past — because it would mean erasing who you became, the things you created in light of and despite of it, the growth that happened in the presence of what threatened to break you.

But it’s not all positivity and feel-good life affirmations.  Life is never as simple as that.

The tree doesn’t spring back to life once all the fruit has been picked.  After multiple fruit-picking sessions — after our kitchen is filled with peaches, to the point that I can’t even fathom what I’ll do with all of them — after all the fruit is finally off the branch, the tree only changes shape minimally.  The branches are off the ground, but the branches still bow.  She still looks more like a weeping willow than what a peach tree should look like.

The rope system we created is still holding branches up.  And the snapped branch will never un-break itself.

That’s the other side of burdens.  They can become your fruit, but they will also change you.  And shifting burden into fruit won’t suddenly spring you back to life.

It takes time.  A lot of time.  And a trusted support system (of strings and anchors, of people who understand you and will listen).  And sunshine, and time, and more time.  It takes a while before you feel like you won’t snap in half again.  And you might never come back to the shape you were before you were weighed down.

1 thought on “Burdens, Strains, and Fruit”