It started with a conversation about the shifting winds.  A talk about how this fiscal quarter feels so different than the last — about the things that have already changed or are about to change, the major shifts that could happen as early as this summer.

“It feels like a new chapter,” I remarked.  And thus opened up both the can of worms and the rabbit hole: the concept of a new chapter.

Perhaps it’s the writer side of me: the side that is always trying to find and piece together narratives, even when there isn’t one.  I know I have to be careful with that: it’s the same part of me that seeks out the story like Don Quixote and his windmill giants.  It’s the same side that’ll exhaust my soul in the effort to find the happy ending, even when the ending has no choice but to be ambiguous and unsatisfying.  It’s the same side of me that can attribute personality traits and personal motivations to people when the opposite proves to be true.  The side that will assume things are far deeper than they actually are.

But it’s not just the writer side of me.  Chapters can act like milestones, like moving pieces coming together, like markers to show you just how far you’ve come in the grand scheme of things.

New chapters used to be very clear and crisp for me, if only because life always seemed to happen at once.  Graduate college, start new job, get engaged (start chapter).  Get married, move to a new state, quit old job/start new job (end previous chapter/start new).  Leave job/career field entirely, purchase first house, move to the country, start yoga teacher training (new chapter).  Tableaus in my life so neatly delineated that they practically could be brand new books.

But what happens when new chapters stop feeling so black and white?

A new chapter.  Truth be told, it’s something I’ve been thinking about for a while.  I know there was a time not too long ago when I was desperate for a new chapter — desperate to put as much space between me and what had turned out to be the most difficult, heart-wrenching, heartbreaking, infuriating, necessary time in my life.  So desperate, that I’d secretly relish when any change occurred — when even my teaching schedule would change, when classes were added or canceled, when entire studios closed down — because it meant one fewer relic from the past hanging onto me in the present day.

A new chapter.  So eager and anxious to put it all behind me — so hard-lined assertive that I’d never be made to feel the way I did in the old chapter ever again, never allow myself to repeat any part of that in any way, shape, or form — that I’d seek out any proof that I had finally turned a page.  I’d notice when something was different, when there was a shift in the energy, and I’d immediately go, “Is this the new chapter?”

And then something would happen — a chance of fate, an interaction, a becoming of the fly on the wall to something that indirectly involves me, an echo that had a few sound waves still left in it — and I’d scramble.  Because, clearly, I was still stuck in the old chapter, the page had not yet turned, and I needed to do whatever it took to change things.

A new chapter.  I seemed to be looking for it the way one might look for a building leveled by explosives.

Perhaps it was because I was worried about referencing old scenes again.  I know I have a tendency to do that — to flip back to previous pages, go over the lines.  Simultaneously beg the main character to be a little more on the ball and berate her for not wising up faster.  Reread all the sad parts, the bad parts, the cringe-worthy parts.  Shake my head at lines of dialogue, at the things that could’ve been said instead. Reference the actions of side characters, lest I ever forget any betrayal, lie, or manipulation.

“You can’t keep referencing the past if you want to start a new chapter,” I had told myself. 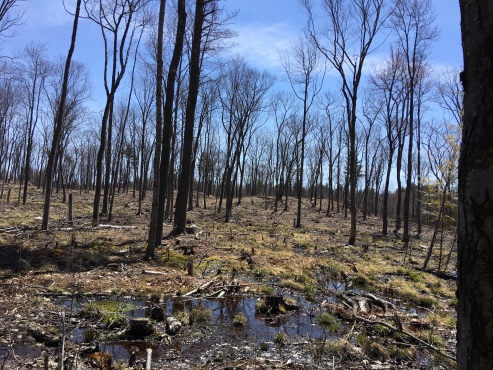 But what is a new chapter?  The book I’m currently reading treats chapter breaks like a pause to take a breath.  The boundary between one chapter and the next so small that sometimes you’ll still be in the same scene, with the same characters, as Chapter 12 turns into Chapter 13.

The thing about new chapters is that you usually get all the returning characters, most of the same scenes.  And even if the chapter were a true blank slate, you’d still have the main character, who is still experiencing the world through the same set of eyes.  And even if you toss away the book and pick up a brand new one, the reader is still the reader.

So perhaps the concept of new chapters should feel less final, less severe — less like a wall constructed but more like an evolution.  The same way we never feel our new age on our birthday — how it’s never like we went to bed and woke up with our skin completely shed and a new identity staring at us in the mirror — chapters are not synonymous when clean cuts from the past.

(And, really, that’s what I was chasing after — not a new chapter, but a clean cut from my past.  But I already knew something like that was impossible.  Run from your past, and it’ll find a shortcut to catch up with you.)

I’ve noticed an uptick in the Cranberry’s “All My Life” on the radio as of late.  Across multiple stations, I hear it with a frequency that doesn’t match its previous airplay.

Oh, my life is changing everyday in every possible way.  I take pause when certain songs come on the radio, or when certain songs are played at almost absurd levels.  I’m just crazy enough to take it in as a message.  Bare minimum, I use it as a chance for a thought experiment: on the off-chance I’m wrong and I’m just projecting out a hope that it’s the Universe/God saying something, why is it that this song gives me pause in the first place?

I’ve been doing a lot of comparing and contrasting — especially in regards to the ways I respond to things now, versus how I would’ve responded not even a year or two ago.  Recently, I found my new sense of self put to the test.  I found myself knee-deep in one of the most infuriating, mind-boggling email exchanges of my career, perhaps my entire life.  I walked away with tears in my eyes and elevated blood pressure and me scooping up my kitten and bemoaning, “People are such garbage sometimes.”  But I also walked away realizing how differently that exchange would’ve gone a few years ago.

Instead of falling into old habits, I had stood my ground.  I was calm, but I took no shit.  I wasn’t going to collapse under the first sign of aggression, nor was I going to feel guilty for having a grievance.  Old me would’ve collapsed, would’ve buckled under even the hint of aggression, would’ve been made to feel ashamed that she dared to feel negatively about something.  But that was the old me — and she’s not me, anymore.

All my life is changing every day in every possible way.

If I am honest with myself, things have been shifting for a long time.  Shifting in a positive way.  Maybe not in the ways I was desperate for one, two, three, perhaps even upwards of four years ago, but they’ve been changing in the way I believe they’re supposed to.  In accordance to whatever plan God/The Universe has for me.  And I don’t realize how much has shifted until something happens that references back a previous chapter, and I see just how different things are — how different I am.

A great book has realistic character development — development that creeps along, rising with the story arc and sliding into place as the tale winds down.  It usually doesn’t appear in the blank spaces, the page breaks, the space between the last paragraph and the words “Chapter Two”.  And perhaps instead of constantly looking for a new chapter, I should just keep on ahead, relishing the words in front of me, seeing in real time what’s in store for the protagonist, and resisting the temptation to see how many pages are left in this particular chapter.