Perhaps it’s because I grew up next to the ocean, but it’s always been something I’ve known.

In the event of a riptide, don’t fight it. Don’t try to swim against it. Swim parallel to the shore until you’re out of it, then take a diagonal path back to dry land.

Granted, my hometown is nestled in a cove within a cove — by the time the water came to us, the mighty Atlantic had been tamed into gently lapping ripples. You could get bigger waves a few towns over in Nantasket, but not by much.

But still, it was advice that I kept with me, especially once I finally got a chance to get out of New England, to see the Atlantic on a direct trek to land, to see what it really means to have a wave break on the shore:

If caught in a rip current, do not fight it. Swim sideways to it until it’s over, and don’t try to make a beeline to shore.

Scene: I’m hanging out in the hotel room in Vegas with my husband, a few days into our vacation, a few days out from our 7-year wedding anniversary, and minutes out from grabbing dinner. I forget exactly what the conversation was — something slightly nonsensical and goofy, speaking more in Couples Shorthand than American English — but after it, my husband looks me in the eyes and says:

“You are so different than the woman I married.”

“Is there a need to put a value judgment on it? Maybe it’s neither good or bad. Just different.”

“I personally think it’s a good thing,” I say. When I eventually stand up, I look in the mirror. It’s definitely not the reflection of the girl from 7 years ago.

My husband has a point — and I can hear my therapist warning me to not berate myself, even if it’s a past self — but I can’t help but think of it as a good thing. The old me was painfully passive, quicker to hide bad news than to find a solution, even quicker still to collapse in on herself and then lash out the moment she felt safe. She was easily manipulated and gullible and had a weak sense of self. She never learned to properly put her foot down and could easily be made to feel guilty for airing any type of grievance. Her impulsivity was usually left unchecked, her compulsions never tempered. She had her positive qualities, but she carried too many things from her parents, including all the traits she swore she’d never take on. My life had to blow up in order to face that reflection squarely — and it took a lot of hard work to shift past her. Maybe I should be a little easier on myself, but, for me, it’s still something to celebrate.

She was who I had to be in order to become who I am now, but that doesn’t mean I have to mourn her passing. 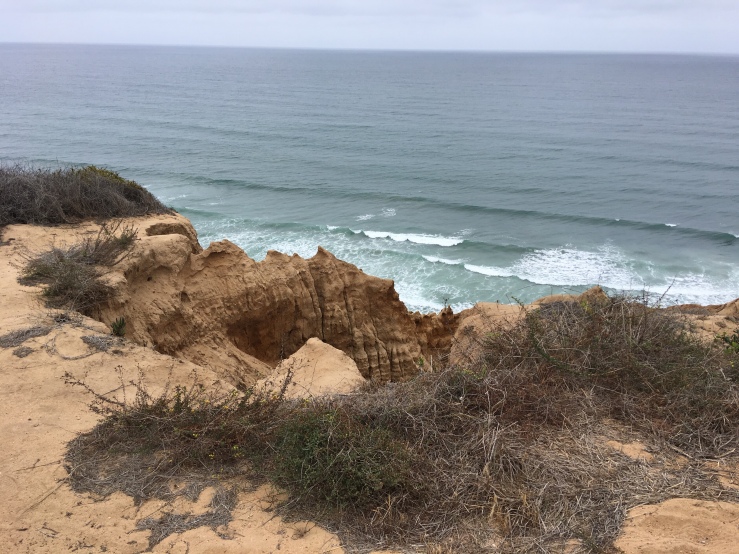 Don’t fight the riptide. Go sideways. It’s on my mind as I dip into the Pacific the day after our anniversary, catching waves in San Diego and attempting to body surf. I think it every time I feel the undercurrent tug at my ankles.

There are warning signs of riptides — weird gaps in the waves is the big one — and I don’t encounter any such thing, but it’s still on my mind. There’s a huge sign at the state reserve where the parking lot meets the paths, reminding me exactly what to do with a riptide. And it’s exactly what I’ve known since I was a kid.

Don’t fight the riptide. Don’t swim against it. Swim sideways to it. Swim parallel to the shore. Then swim diagonally back.

I’ve learned that every riptide in life, big and small, needs to be handled like that. Don’t fight the current. Recognize the inevitability of getting pulled under. Fighting against it is pointless and will wear out what little energy you have left. Go sideways and swim until you find the endpoint — and there is an endpoint, and it’s shorter than the infinity you swear it is — and, once your head is above water, don’t try to scramble for the shore. Let your return back be a little askew.

Don’t fight it. Whether the riptide is an hour of your day or three years of your life. The waves are more powerful than you. They will win in a battle of wills.

But you also can’t just go with the waves — that’s how you get sucked in and tossed around. My body registered that every time I wasn’t deliberate with a major wave, and found the wave smacking me to the bottom, scraping my knees, my hips, my shoulders against the sand.

It’s something I’ve learned time and time again (but apparently still needed the lesson): let the forces around you take control and you’ll find yourself battered and dragged and tossed about and scraped.

Don’t fight it but also don’t let it dictate things. Both will result in drowning. Swim alongside it, deliberate in your pursuit but also understanding your narrow parameters.

It’s solid advice, something I learned as a kid and then had to remember when everything blew up. Spot it when you can, but if it gets you, swim alongside it — it’s shorter than you think it is, and far shorter than if you just let it drag you. Recognize how powerless you are to go at it head on. And don’t try to scramble back to where you once were the second you get out of it. Take your time getting back, and recognize you’ll be far from where you were from before the riptide.

Scene: we’re a few days into San Diego, sprawled out at a beach nestled away by a set of cliffs. The lifeguard comes barreling down the shoreline in his red Toyota pick up. He’s letting everyone know that the rip currents are prevalent today — that, if you’re not a strong swimmer, to go no deeper than waist height.

We appreciate the warning. We really haven’t been going out further than shoulder height, but it’s still good to know. My husband was once an elite swimmer, and I’ve amassed a decent amount of upper body strength over the last few years. My cardio isn’t the best it’s ever been, but it’s still good. It’ll translate well enough to swimming sideways, should the need arise.

In the event that the worst occurs, we’ll be ready.

Besides, nothing can keep us out of the water. Some waves are just meant to be faced head on. 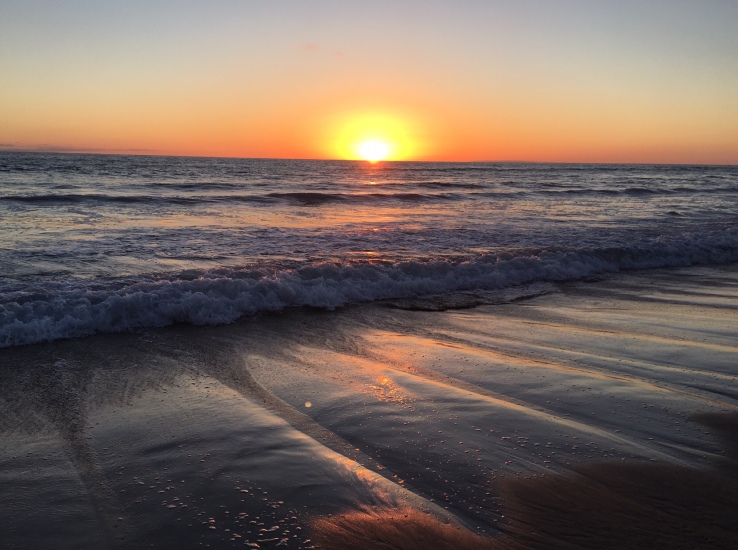